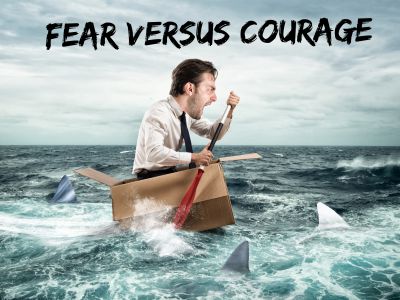 I don’t know about you, but I don’t much enjoy feeling fear.  I’d rather it not be a part of my life.

Fear is part of our wiring, deep in our DNA and deep in the circuitry of our brains. It keeps us safe — sometimes super-safe.  Which is the problem.

There is a central life coaching question:  “Where do you want to be?”  (Few people seek out coaching because everything is great, they are happy, and life is where they want it to be.)

The next question is “What keeps you from getting there?”  When I dig in with clients, that question often hits against external barriers.  Things the client can’t change.

But dig long enough and dig deep enough, and you hit fear.  Fear is what often keeps us from getting what we want in life, from getting the life we most deeply dream about.

If fear is a fact of life (it is), then fear isn’t really as much in our way as we let it be.  After all, other people (who also have fears) have made it.

What breaks through the fear, to get us to the life we want?

It is not being “fearless.”  That won’t happen… although you can have LESS fear.

It is COURAGE.  And courage is not the opposite of fear… it is action in the direction of fear.  Which is what dissipates fear.

Let’s talk about fear… and more important, courage… in this episode of the Thriveology Podcast.

RELATED RESOURCES
We ALL Have Fears
Facing Fears
Your Fierce Life
Book:  Thrive Principles
Book:  The Immutable Laws Of Living 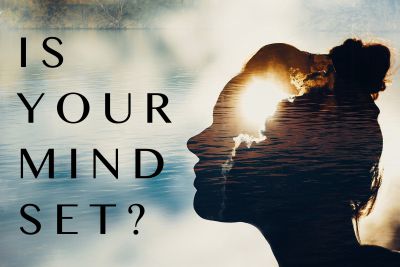 I’m not an athlete, I told myself.  I was the last chosen for teams pretty much every time.  And more often than not, admittedly, I dropped the ball or didn’t run fast enough.  So I lived up to the low expectations of being a teammate.

That kept me believing that I was not an athlete.  And so, I never tried to be athletic.

Years later, when I was recovering from being sick, I decided I needed to get into shape.  I was motivated by a scuba class when I realized how out of shape I was.  I dragged myself into the weight room, so I wouldn’t embarrass myself in class.  I took to the pool for the same reason.

And I slowly got into shape.  Which led to a friend asking if I wanted to adventure race.  Why not?  I might as well, I reasoned.  Then, I trained and completed a trail marathon.  And ran quite a few 5k’s.  Not an athlete, though.

I noted to her that writers do one thing.  They write.  She was writing, ergo she was a writer!

Then I went for a run.  And thought about that discussion.  Runners are athletes.  Runners run.  I was running.  Ergo, I was a runner… and maybe an athlete?

My mindset had tripped me up.  I had myself in a fixed mindset.  And to get to a better place, I needed to shift to a growth mindset.

In this episode of the Thriveology Podcast, I discuss Dr. Carol Dweck’s concept of growth and fixed mindsets from her book, Mindset.  A fixed mindset keeps us stuck.  But a growth mindset always gives room for growth and change.

Listen in to discover where your mindset is stuck… and how to shift it to growth. 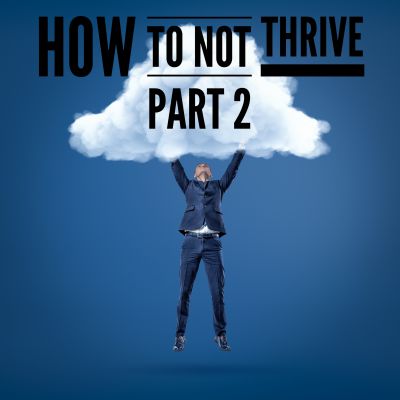 Well, you are on to me!  Last week, I started talking about things you can do to guarantee that you DON’T thrive.  I’m sure you knew I didn’t really want you to NOT thrive.  But I wanted to point out some ways people make themselves miserable… and what they might do to shift.

If you missed that episode, JUST CLICK HERE TO HEAR IT.

It is interesting to notice how we humans can really mess up our lives!  Life throws us enough to deal with.  Then, we tend to multiply it with our own blind spots and stuck points.

With my Top 10 List To Guarantee You Don’t Thrive, I wanted to point out 10 ways that people really do keep themselves stuck.  And the fact is, I see these same patterns repeated over and over by many people.

So, if you see yourself in one (or more) of the stuck points, that just means you are… well… human.  Congratulations on being able to spot it!  That is the first step in doing something different… something new… something more… THRIVING!

Listen in below for the REST of the ways you can keep from thriving… so you can thrive!  (Unless you don’t want to… then just follow my suggestions.)

RELATED RESOURCES
How To NOT Thrive, Part 1
Control What You Can
Dealing with Stress
Gratitude
Feedback
Meaning & Purpose
Make An Impact
Book:  Thrive Principles 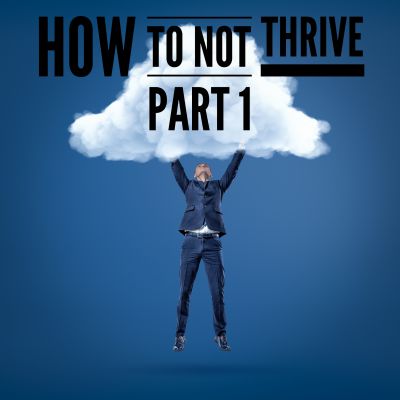 But today, just for a moment, let’s assume you DON’T want to thrive.  In fact, you want to… well, do the opposite of thriving!  You want to be miserable and live a smaller life.  You want to feel stuck and frustrated. (I’m not going to even explain WHY you would want to do that… let’s play a little mental game and pretend you just don’t want to thrive.)

In this episode of the Thriveology Podcast, I start in on my Top 10 List of How NOT To Thrive.  I cover 5 top ways to NOT thrive in this episode, and follow up with the other 5 in the next episode.

Why in the world would I do this?

Because if you know how to NOT thrive, then you can NOT do the NOT’s.  You can do the opposite, and move toward thriving.  It is also a good way to run through the list and see if you find yourself falling into any of the non-thriving traps.  They are all around us!  And sometimes, we are doing them… not even realizing it.

Listen below for part 1 of How To Guarantee You Don’t Thrive.

RELATED RESOURCES:
It Isn’t Personal
It IS What It IS
Forgiving
Hard Isn’t The Question
Dealing with Fear
Book:  Thrive Principles 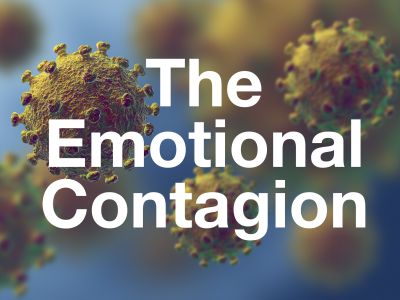 You can also catch it from just reading, watching, or listening to something.

In 39 milliseconds, you have it… and you didn’t even see it coming!

Coronavirus?  Nope.  That is certainly serious, and you absolutely want to do everything you can to avoid catching or spreading it.  I do not want to minimize the risks of this pandemic.

But that is not the contagion I am focusing on here.

Humans have a natural wiring (we share it with the animals at the watering hole… and all the others) to pick up on fear and anxiety.

Many times, people have said, “Should I panic over this?”  The “this” has been lots of different things.  And my answer is always, “Panic is never a better option.  Should you respond?  Should you choose an action? Yes.  Panic?  No.”

That is easier said than done. But on this episode of the Thriveology Podcast, I share why fear/anxiety is contagious, along with how to limit the infection.  Listen below. 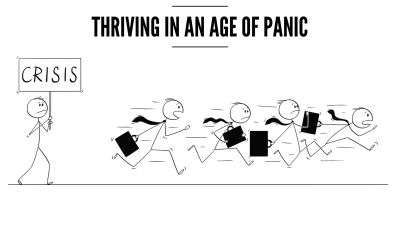 When I recorded this episode of the Thriveology Podcast, it was almost another world.  Many people were still minimizing the novel coronavirus.  Even politicians were downplaying the severity and impact.

So much has changed.  Many, if not most, schools are closed to face-to-face instruction.  Many workers are working from home, where possible.  Lots of restaurants are only serving by delivery or take-out.  New guidelines suggest not being around more than 10 people… and that number may go down.

The world has changed, almost overnight.

It affects us all… making this episode just as important, if not more so.

We are going to have to define what it means to thrive.  That is what happens when it feels like every day is an attempt to survive.

Here is the good news:  humanity will prevail. We can thrive. Life WILL go on.  But it will never be the same.  Things will change.  How we used to do things will disappear, but new ways will appear.

I know these are scary times.  But we will get through this.  Together.

That’s what we do.

Lisen to the episode below.

Feeling stressed out?  Wondering what your doctor would say?

But stressed out?  Not so much. 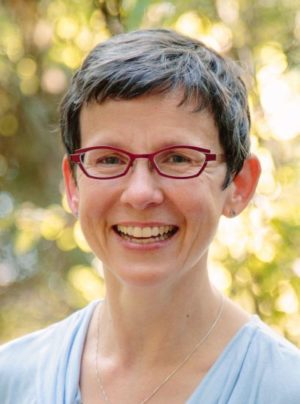 That was the experience of my guest, Elizabeth Hughes, MD.  A practicing physician, Elizabeth was reading in the back of a medical journal about adrenal fatigue.  She noticed that most of her patients suffered from the same symptoms.

And she realized that the culprit was stress.  Or more accurately, the inability for her patients to successfully deal with stress.  No surpise, Elizabeth realized, given how even her medical school training had failed to offer solutions.

That led Elizabeth to seek ways to help.  She picked up a number of certifications in the process.  But more importantly, she discovered an important antidote to stress that is simple and powerful.  Since stress is implicated in many chronic illnesses and adversely affects life satisfaction, it is important for each of us to find that antidote to stress.

Listen in to this episode to learn how. 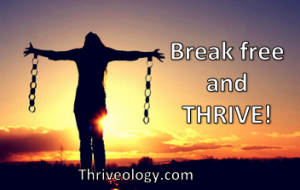 For a century or so, our culture has become increasingly “psychologized.”  Something bad happens to you, your psyche is injured, and your option is to realize what happened to you.  That is, generally, the topic of therapy:  discovering the roots of your injury.  In fact, perhaps on a bad day, Sigmund Freud said that the goal of therapy was to move from neurosis to common, ordinary, everyday unhappiness.  Not a particularly lofty goal!  This is a deficit model.

More recently, the model of resilience has taught that some fortunate people can have the same injury, but manage to make it back to “normal.”  Somehow, the trauma does not affect them in a negative way.  This is a “break even model.”

There are a small number of voices that have realized that every injury is truly a challenge — an opportunity for growth.  It is possible to take a hurt, pain, tragedy, challenge, or trauma, and use it as a springboard for growth.  This model is the “plus model,” a thriving model.

Which model captures you?  Can you move to (or even more into) a thriving model?  Join me in this week’s podcast to learn about the 3 models and how to move into a thriving model.