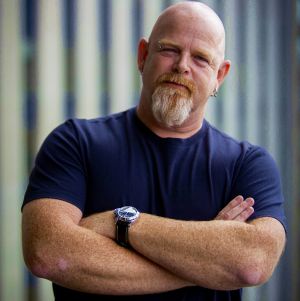 When I was a kid, I hit this point when I was growing fast.  So fast that my limbs hurt, I constantly tripped, and knocked everthing over as my hand got there before I expected.  Growth was a challenge.

Generally, though, it works the other way.  When we are challenged (and take it on), we grow.  A child wants to crawl, then walk, then run.  But wanting to is not the same as being able to.  Crawling ends up being a bellyflop.  Walking leads to teetering bottom-bumps.  And running… well, that just leads to face-plants.  But so far, I have never seen a child give up and say, “Well, I just can’t do that.  I guess I’m not meant to crawl/walk/run.”  The child just tries again.

Challenge is something we can rise to, expand into.  And when we do, challenge is the impetus for growth.

In this episode of the Thriveology Podcast, I talk with Steve Sims.  At the age of 15, Steve finished his schooling in England, and stepped right into what seemed to be his destiny:  masonry.  Just like his father, his grandfather, his uncles, and his cousins.  In an instant of inspiration, Steve looked at his family and realized this was not his destiny.  As he told me, it was not that he was better than his family, but that he thought there was something better for him.

That set him on a search for his own destiny, a way to see the world and meet people with different viewpoints and lifestyles.  This twisted path has led to now.  Through taking on challenges and growing through them.

Listen in as Steve and I discuss his life, his challenges, and the success of taking on those challenges.

RELATED RESOURCES:
Steve’s Website for More Information
The Power of a Challenge
Learn or… Learn
Act or Accept