You are here: Home / Archives for thrive podcast 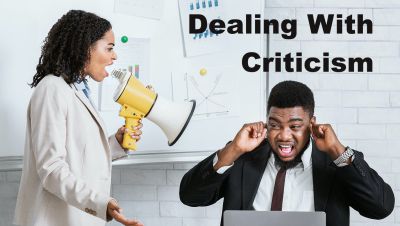 I don’t know anyone who really likes criticism.  Well, at least receiving criticism.  I do know some people who seem to relish dishing out criticism!  You probably know some, too.

But criticism can be important feedback.  And feedback can help us to make changes in ourselves and our habits.  They can help us change harmful or unhelpful parts of our lives into more productive and healthy parts.

Which means we have a problem.  We don’t like getting criticized.  But that criticism might just hold some important information for transformation.

One of the coaches on my staff once remarked on some rather critical feedback from a client, that she had received some “free coaching.”  It took a few moments to get away from a defensive reaction and toward a helpful reaction.  But my coach made the shift.

Which raises the question:  how do you sift through that feedback to decide what to discard and what to keep?  How do you isolate the treasures amidst the trash?  These days, there is a lot of trash to sift.

In this episode of the Thriveology Podcast, I explore a framework from feedback coach, Shanita Williams.  Her sifting strategy can help you find the useful and release the useless feedback. 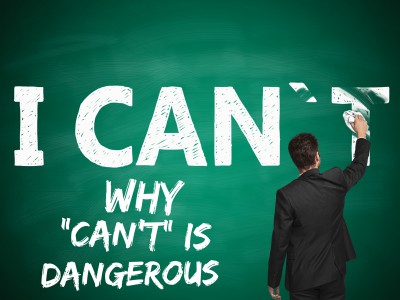 Which is unfortunate.  History is littered with people doing the very things someone else said, “You can’t do that.”  Turns out, you can.

And many times, we do the same things to ourselves.  We start tell ourselves, “I can’t,” and then believe it.  We know we can’t do it.  We just told ourselves we can’t.

In reality, there are 4 types of “I can’ts.”  One is absolutely true.  The three others are not true.  They are about capability, timing, and. . . well, that last one is important enough that I cover it in this week’s podcast.

RELATED RESOURCES:
Learning and Life
Be an Experiment
Show Up
Prior Podcast on Can’t 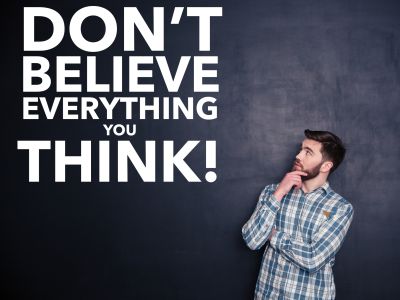 Those thoughts, they get us into trouble, don’t they?

We keep looking for that thing that will make us happy. We think we know. We think that thing, that person, that place, that paycheck, position, etc., etc., will finally do it.

Until we get it, get there, have that relationship, or whatever… only to find that it didn’t quite work.

Oh, sure, we might be happy for a brief time. But not the way we thought. That “shiny new object” just didn’t do it. And back to the drawing board we go.

Mostly because we keep thinking that that thing “out there” is going to do it.

Notice that “happy” and “happen” share a root.  Something out there needs to happen in order for us to be happy.

Which is not the path to happiness.  No matter what your thoughts are telling you.

In this podcast episode, I discuss why our thoughts trick us, and what to do instead. 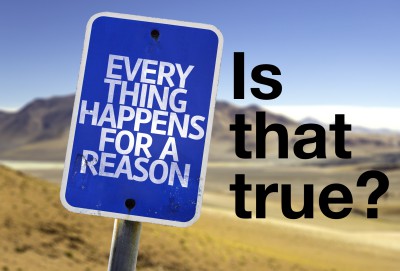 In recent days, I have been with people in the middle of horrific losses.  Inevitably, someone steps up  and in an attempt to comfort, says, “Everything happens for a reason.”

That comment is rarely comforting in the painful moments.

But deeper than that, is it even true?

Many people default to this as a reaction to something that happens and is outside of our capacity to understand.

Sometimes, we want to think that there is something behind it — not just some random event.  But what does that phrase mean?  Does it mean that some force is trying to teach some lesson?

For many people, the answer is yes.

But does that make it so?

Does everything happen for a reason? Given all that is going on these days, this question seems particularly important. 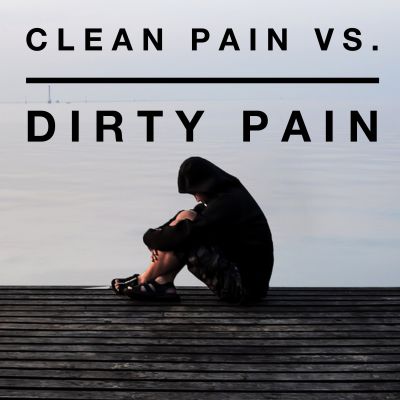 Anyone who tells you that you can go through life without getting hurt and feeling pain is either lying or hiding.

Life is rough-and-tumble.  Pain is unavoidable.

But there is a type of pain that we can leave behind.  That is more a result of our own thinking than anything external, any injury either physical or emotional.

Call it “Dirty Pain.”  Which is distinguished from “Clean Pain.”  Clean pain, that is the initial hurt.  When you hit your foot, it hurts.  That is the bodily response to the injury.  When someone says something to you that is mean and spiteful, your feelings are hurt.  That is the emotional pain.  It is initial.

But what if you chastise yourself about your being “clutsy,” or about your “stupid action” that led to that foot injury?  Or what if you made that hurtful comment about you, and not about the person who said it?  What if you kept dwelling about it?

Let me be clear:  it is fine to ask how you might prevent an injury in the future.  It is fine to listen to feedback from others, that might give you some insight into things you need to change.

It’s the next step after that.  When you keep berating yourself.  It’s when you take the next step… you attach to the pain.  Buddhism refers to that as suffering.  You and I can think of it as “Dirty Pain” (a term coined by ACT – a mode of therapy).  It is dirtied by our own mental state — not the cause of the pain.

What do you do about that?  We discuss it in this week’s Thriveology Podcast.  Listen below.

RELATED RESOURCES:
Life Is Tough
Letting Go
What You Can Control
The Forgive Process Book

We all have times in life where we just feel… stuck… in a rut.  Life on repeat.  Another day, another week, another month, another year clicks by, same ol’ same ol’.

That is the definition of a rut, just moving forward on a path of least resistance, unable to change direction or shift focus.  A rut.

For many, this pandemic has been one big rut, stuck going forward, time passing by but little changing.

Can you get free from a rut?  Can you break out of a rut?

In this episode of the Thriveology Podcast, I explore the nature of a rut, deciding if you are really stuck in a rut (or just resting), and how to break out of the rut.

At the beginning of my career, I was a hospital chaplain.  One of my tasks was to help people accept what was going on… to accept the diagnosis, the outcome of an accident or tragedy, to accept the changes.  Interestingly, many times, it seemed that those wanting the person to “accept” were really looking for resignation.  Kind of giving up.

I think our understanding of acceptance has expanded since then.  But that doesn’t make it any easier.

Except they don’t.  They happened as they did.  They are happening as they are.  And they will happen as they will.

Yes, we have some control about what we do in this moment, and what we will do to move toward the next.  But not enough to create our alternate reality where we get to choose everything (we do get to choose our own response, though).

I unpack what that is about and talk about how we can make the shift in this episode of the Thriveology Podcast.

RELATED RESOURCES
Dealing with Grief
When to Act, How to Accept
Is the Present Perfect?
Book:  The Thrive Principles 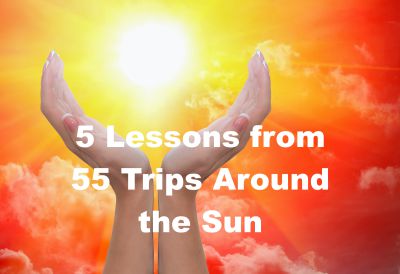 Another year has passed.  I added a year to when I answer, “How old are you?”  Well, at least in theory.  I am an unreliable narrator for reporting my age.  By accident.  But on a repeated basis.

That said, as I recorded this episode of the podcast, and write these words, I am celebrating 55 trips around the sun (and I complain I don’t get to travel much!).

I’m not sure about claiming wisdom, but I do claim some lessons from those years.  Lessons I keep learning and relearning.  Lessons I must remind myself about.  But lessons that matter to my life.

While there are quite a few, 5 seemed to be appropriate for 55 years.  5 lessons from 55 years on this earth!

RELATED RESOURCES
Do Things Happen for a Reason?
We Aren’t Getting Out Alive!
Your Purpose
Thrive Principles Book 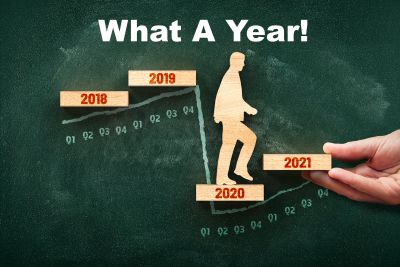 What a year!  It was one year ago this week that I was on my last business trip.  I was at an event with my publisher.  Already, we knew COVID was out, and knew it was gaining steam.  Other countries had already gone into lockdown… and the US was on the precipice.

While I was away, my wife and I were coordinating with our adult children, trying to make sure we could get them to our home before travel was locked down.  That weekend, both came home.

We thought it might be a number of weeks.  They were thinking two to three.  I was thinking a month or a bit more.

That ended up being months on end.  They spent more of 2020 in our home than in their own places.

The economy screeched to a halt, trips were canceled, schools were closed.  And our medical system started to strain, faltering under the weight of one illness closing off some areas, while filling others.

It seemed like every day, there was some new shift, new discovery, new point of vulnerability.  And in its wake, we, as a country and a world, strained to cope.  The grief poured out in anger and despair.  Some continued their grief in the world of denial.

And still, the numbers climbed.  Families lost loved ones.  Spouses lost partners.  The world lost citizens.  To the point that we could no longer truly comprehend the numbers.  Some people recalculated by throwing caution to the wind.  Others recalibrated to a life in isolation, hoping that was safe.

One year later.  What a year!

Oh, and it isn’t over!  Although there are plenty of places and people trying to move on, we are still in the midst of a crisis.  While there is a place, in the not-so-distant future, where we get back to a life much more similar to a bit more than a year ago, we aren’t there yet.

And we are also now seeing that the pandemic will not end equally.  It hasn’t impacted citizens equally, and the end will come just as unequally.  But it will come.  How do we get there?  I hope together, and I hope a bit wiser.

In this week’s Thriveology Podcast, I think about the shifts and impacts of this past year.

One day, I was watching some videos (you know how that rabbit hole works) that led me to a video on this interesting sport.  I love water sports, and am frequently daydreaming this time of year about being in warm water. 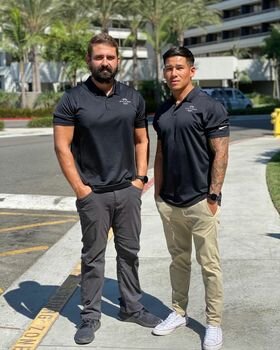 I have no idea how that led to this video, but it was a team playing this weird underwater game of hockey/ultimate frisbee/survival thing.  It was the Underwater Torpedo League.

Underwater Torpedo was invented by two former special ops guys.  They used it to help training clients get better at breath holding and calm under stress.  But it sure looked like a blast of a time!  I filed it under “I’d love to do that!”

Fast-forward and I met these two guys.  Turns out they do more than just train some people.  They actually train professional athletes on a regular basis, including MMA, NFL, and even pro surfers.

Prime Hall and Don Tran are the guys behind the game.  But they are also performance coaches outside the pool.  They work with people about performing in life, using their F.R.E.E. Your Mind protocol.  Through their coaching, they help people reduce stress, perform better, and become better versions of themselves.

In this episode, Don and Prime discuss their protocol with me, so that you can make shifts toward higher performance in all of your pursuits.

RELATED RESOURCES
FREE Your Mind Info Website
Underwater Torpedo League Website
What Is Stress?
How To Deal With Stress