You are here: Home / Archives for nebraska mall shooting 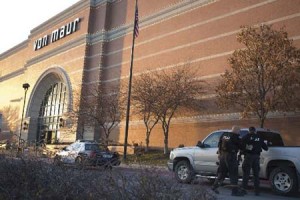 OMAHA, Neb. – Christmas decorations are in place and holiday music fills
the atrium, yet a gloom punctuates the shopping season at the Westroads
Mall.

Employees, their families and friends planned to gather Friday at the steps
of the Von Maur department store in remembrance of the eight people killed
a year ago in the deadliest mall shooting in U.S. history.

“I carry the visible signs of Dec. 5,” said 62-year-old Fred Wilson, who
nearly died that day. “Other employees saw things I didn’t. They may carry
their wounds on the inside.”

Wilson went back to work part-time at the mall after Memorial Day. He says
there was never any question in his mind that he should be there.

He can no longer wrap gifts at work – his right arm is still in a sling,
and he can barely move his fingers.

“I came to a degree of forgiveness … when I was in the hospital,” Wilson
said. He tries to help others learn how to forgive, speaking at churches
and schools and seminars.

“I was blessed to have lived,” he said. For those whose loved ones did not,
he understands it’s a different story.

Nineteen-year-old Robert Hawkins gunned down eight people on Dec. 5, 2007,
before turning the gun on himself.

Hawkins entered the Von Maur department store in west Omaha and briefly
looked around before exiting. He returned a few minutes later with an
assault-style rifle hidden under his sweatshirt.

He took an elevator to the third floor and opened fire.

Police found no connection between Hawkins and his targets, only a suicide
note that said he wanted “to take a few peices (sic) of (expletive) with
me.”

Ron Jorgensen lost his wife of “50 years and three months.” Her voice
remains on his telephone answering machine. The American flag continues to
wave at half-staff in his front yard.

“I’ve lost everything,” he said. “I will never forgive Robbie Hawkins or
his parents.”

Greg O’Neil prefers not to even speak Hawkins’ name.

“I don’t know when, or if ever I’ll ever be able to forgive him,” he said.
“I can’t even put those words into a sentence including that person.”

O’Neil worked at Von Maur as a loss-prevention manager for nearly five
years before finding a new job in 2006, so he knew most of the people
killed or injured. He left his job so he could date employee Angie Schuster
without violating company rules. They later got engaged.

“Just remembering her smile. Oh, her smile,” he said. Her belongings still
fill his home. He visits her grave every couple of weeks.

On Friday, Von Maur employees have the option of taking the day off, said
company president Jim von Maur.

“We don’t want to put pressure on those employees who don’t feel they can
do it,” he said.

In Moline, Ill., the family of the youngest victim planned to gather to
remember the good times they had with Maggie Webb, who also worked at the
store.

But forgiveness isn’t likely to be mentioned. Clark doesn’t believe she
could offer that to Hawkins.

“I honestly believe forgiveness is something that the killer needs to ask
for from the Lord and not from me,” she said.

Hawkins was well-known in the state’s juvenile courts and social services
agencies. A habitual drug user and troublemaker, he was in and out of
foster homes.

During his time as a state ward, he was diagnosed with depression,
attention deficit disorder, impulsiveness and a malady characterized by
hostility toward authority figures. He was convicted of third-degree
assault and attempting to sell drugs at school.

Hawkins spent four years in a series of treatment centers, group homes and
foster care after threatening to kill his stepmother in 2002. Before the
shooting, he had broken up with a girlfriend and lost his job at a
McDonald’s.

A year after Hawkins’ deadly rampage, Von Maur employees try to busy
themselves with the holiday shopping season. Security guards stand on the
balconies. A plaque at the bottom of the escalator memorializes the victims.

First, let me say that my topic today will upset some folks.  But I will be upsetting most of them out of a misunderstanding of my thrust.  Let me say that I feel great compassion for people who have suffered tragedies.  In fact, I feel so much compassion that it pains me on how much hurt is added to ourselves.

I am not “picking” on the folks involved, and certainly not wanting to make an example out of the victims.  Because the truth is, what I am addressing is so widespread that I would say it is a rampant belief.

Let me point out what is behind the belief:  somehow, forgiveness is FOR the other person.

And that is the problem, the fallacy of this.  After helping people to move toward forgiveness, thinking about the topic, teaching on the topic, and trying to apply this to my own life, I have realized their are two paradigms of forgiveness.

Many of us keep getting caught in paradigm #1.  So let’s explore that for a moment.  This assumption is really built on several factors.

The first factor is biological.  Your brain is designed to keep you alive.  It holds onto threats, locks them in, and is unhappy about letting them go.  So, our biological design is to keep a filing cabinet full of potential and past threats.  But when our thoughts, our mind, grab hold of those threats, we shift them to resentments.  We store them as memories to play over and over in our minds, with a commentary about how we were hurt.

It is one thing to have a brain watching for threats and a mind constantly playing through our hurts.  One is protective.  The other weighs us down.  The first keeps us safe, the second keeps us captive.

Then we have all the religious and cultural messages about how we “have to forgive.”  In other words, our culture betrays us and tells us we have to forgive the other person for that other person.  It misses the true message of forgiveness.  Too bad.

You see, in this case, the truth is behind door #2.  We forgive for ourselves.  We choose to forgive so that we can move forward.

That is what NOT forgiving is about.  When we refuse to forgive (it is a choice, whether we recognize that or not), we are attaching ourselves to our pain.  We end up suffering.

In this context, there is nothing that is unforgivable, because it is no longer about holding the other accountable (in this case, a dead man), but in choosing to move forward.

Let me be clear:  people have to work through their grief at their own pace.  At some point, for there to be real healing, forgiveness must be part of the process.  And anytime we slow that process down because we have convinced ourselves that forgiveness is for the other person, we have merely increased our pain.

To forgive is to set a prisoner free and discover the prisoner was you.—Unknown

He who cannot forgive breaks the bridge over which he himself must pass.–George Herbert

Resentment is like a glass of poison that a man drinks; then he sits down and waits for his enemy to die.—Unknown