You are here: Home / Archives for adult learning

On multiple days each week, my wife and I play a game.  She points to a bruise and asks, “How’d that happen?”

Fair question.  But I don’t have a specific question.  All I can say is, “Rolling at jiu jitsu.”  Yep, my 52 year old body has to tolerate my decision to take up jiu jitsu last January.

A few months after I started going to jiu jitsu, I posted a podcast episode on Lessons I Learned At Jiu Jitsu. 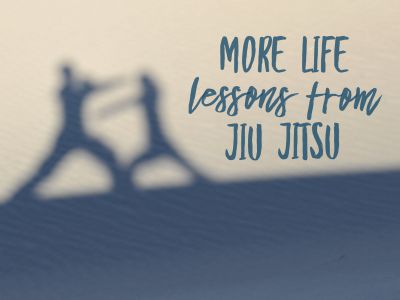 Well, here we are, some 11 months later.  And I have learned a few more lessons.

Since I posted the first episode, I have continued going to class throughout the week.  And with continuing to go, I also progressed.  In the Gracie Academy framework, I earned my Combatives Belt back in November.  That means that… well… I am still a white belt.  Just an advanced white belt!

Which means that I am now allowed in the advanced class, the Blue Belt Cycle.

Which meant that everything I had learned up until then was met with a block or defense when I tried it on a higher ranked belt.  It had worked fine before!  But now, I was back to square one.

As I have told a few people, it is kind of like when you are in the last year of middle school.  You think you are “top dog,” and strut around a little, pretending to own that school.  Then, you go to high school.  And you discover you are at the bottom of the ladder.  Back to beginner.  That would be me.  Back to beginner.

Humbling?  A little.  But more of a reminder that progress includes lots of new beginning points.  So now, when I can’t make a move (or more likely, when I get submitted and have to tap), I just have to laugh… then learn.

Listen in to this week’s episode for 4 more life lessons I have (re)learned from jiu jitsu.

RELATED RESOURCES
Life Lessons from Jiu Jitsu
You Have To Show Up
When Your Ego Trips You Up
Perspective
Book:  The Immutable Laws Of Living
Book:  Thrive Principles